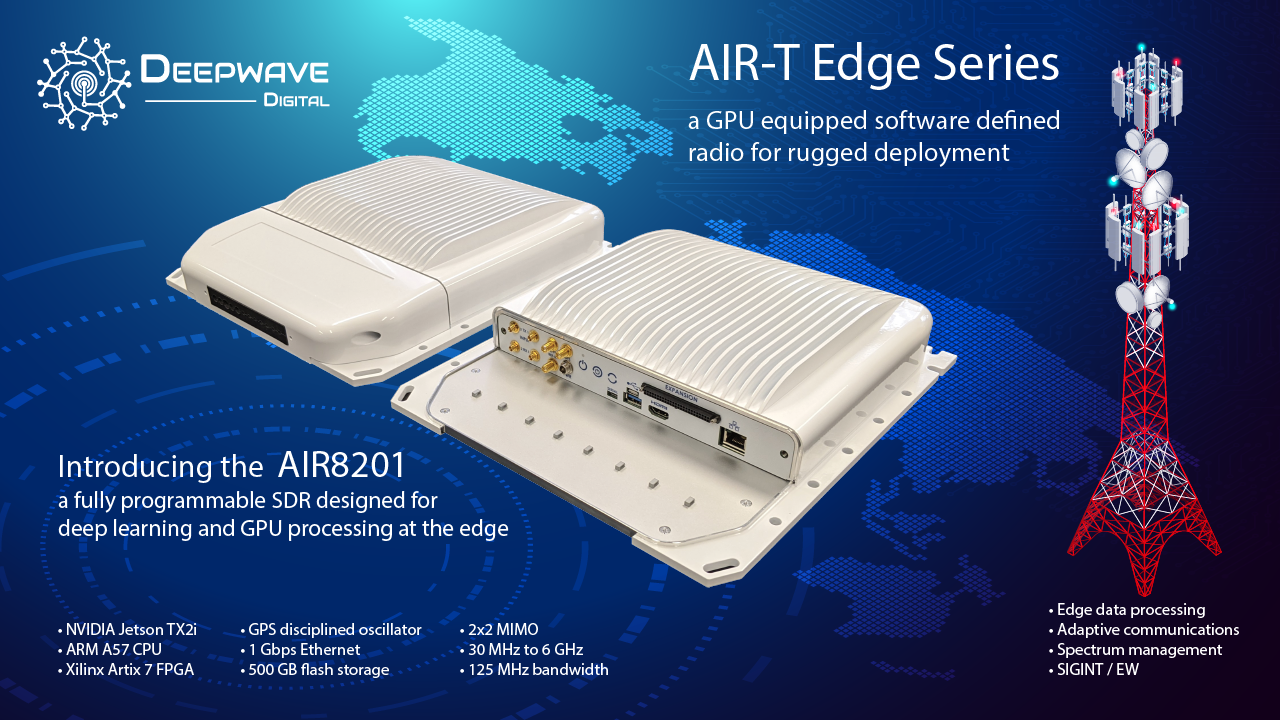 Artificial intelligence (AI) technology has significantly enhanced capability within computer vision, speech recognition, cybersecurity, and robotics. In parallel, demands on performance in radio frequency (RF) systems have become increasingly more complex while simultaneously requiring higher data rates. The next generation of wireless technology will require real-time, wide-band, digital computation, and the use of AI algorithms for autonomous processing. Most embedded software defined radios (SDRs) are only equipped with a CPU and a field programmable gate array (FPGA). The CPU benefits from a wide list of available software tools, but has limited processing power. The FPGA has a tremendous amount of processing power, but can take months to program. The inclusion of a Graphics Processing Unit (GPU) in an SDR, a feature unique to the Deepwave Digital SDR products, represents the best of both worlds: the ability to be easily reprogrammed accompanied by a immense processing power.

Deepwave started this GPU accelerated SDR market in 2019 with the Artificial Intelligence Radio Transceiver (AIR-T) Embedded Series. The incorporation of the NVIDIA GPU into our SDR allows for parallelizable applications, such as AI and signal processing, to be performed directly on the RF sensor. This reduces cost and complexity by eliminating the auxiliary computer that is required by the majority of SDR vendors, and allows for processing to be co-located with the deployed radio without the need to stream data to a remote processor. Today, we are excited to announce the AIR-T Edge Series with the launch of the AIR8201.

The Edge Series SDRs are rugged, high-performance, GPU enabled software defined radios that are ready for deployment in outdoor and harsh environments. The AIR8201 sensor contains a fully functioning Linux operating system and is equipped with three high-performance processors: a GPU, CPU, and an FPGA.

At its core, the AIR8201 leverages the technology that has proven reliability: the NVIDIA Jetson TX2i embedded GPU processor, an industrial grade Xilinx FPGA, and the Analog Devices 9371 RF transceiver. In addition to these tried-and-true technologies, we have added significant capability to this system including:

The AIR-T Edge Series product line is supported by the same AirStack application programming interface (API) as of all of Deepwave's SDRs. Existing applications that were developed for any AIR-T are now able to be deploy in harsh environments with little-to-no modifications. Users are able to program in a wide rage of industry standard APIs. This allows customers to leverage the enterprise software tools that are developed and maintained by the industry leaders such as NVIDIA, Microsoft, and Google. Reliability and dependability is thereby improved compared to many other SDR product lines.